This study is part of the geodynamic research of the natural and anthropic features and analysis of the co-evolution of the environment/society in ancient times on the western coast of the Nile Delta. The mapping of the land and the port infrastructure of the Bay of Alexandria as a whole was extended to about thirty kilometres north-east of the bay of Aboukir, giving new research perspectives. The work of physical geography, geomorphological surveys, paleo-botanical and marine biology, and the study of the circumstances and chronology of events that led to the submersion of the banks, showed the need to take into account the diversity of each site, the variable weight of sediment dynamics, the mobility of the sea level, and the mastery of the physical environment directly related to the organization of space.

Applied to the Egyptian coast, especially the Alexandria area and the western edge of the Nile Delta, the methodical and systematic approach of the IEASM proved successful and brought new knowledge of the topography, the toponymy, the periods of occupation, essential to the understanding of coastal areas. The findings, based on sound knowledge extended by modern scientific methods, included information that was not directly archaeological – inventory of beds of river, colluvial and alluvial areas, coastal lakes, winds, currents, etc. – all of which developed the understanding that we have of the sites of Alexandria and Aboukir bay. 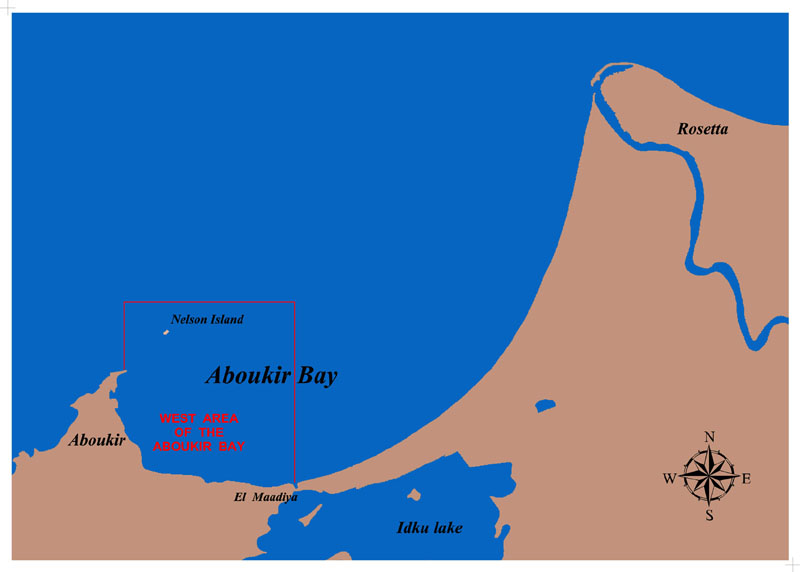 Prospection in the bay of Aboukir

The global research objectives were to understand the organization of the Portus Magnus of Alexandria and the sites discovered in Aboukir Bay (Thonis-Heracleion and Canopus East), taking into account a decade’s archaeological findings.

The preliminary scientific step were geological and geophysical surveys which would then be enriched by archaeological data from the search. The study thus considered all the geomorphological/archaeological data together with information from epigraphic, iconographic, and literary sources. In addition, it could not be understood without a thorough knowledge of the historiographical accounts of the early explorers. In Alexandria, taking into account the tendency to magnify the Mediterranean metropolis, this information allowed the establishment of benchmarks in the area of research which covers 400 hectares of the present port. A known location on the coast of Caesareum, marked in the past by the two ‘Cleopatra’s Needles’ was a known ancient reference point. Similarly, the current cape Silsileh corresponds to a remnant of the ancient cape Lochias, which formed the eastern boundary of the former Portus Magnus. Finally, the presence of extensions of port infrastructure and submerged lands under the waters of the port of Alexandria was no doubt given the remains found on land and the descriptions of the Portus Magnus provided by texts. In the Bay of Aboukir, the possibility of orientating research according to points corresponding to identified ancient places was almost impossible. Instead of having clear markers near to the submerged sites, reference points were in fact large areas of terrestrial and submerged remains, with only vague outlines and distant from each other. In addition, the geomorphological configuration and the geological conditions specific to the Canopic region differed somewhat from those prevailing in Alexandria Bay and therefore raised a number of specific questions. The work undertaken in 1996 in the Bay of Aboukir was therefore, before any archaeological excavation began, to determine the contours of the submerged Canopic region. This is a large triangle of land 10 km high and 10 km across the base – the position of the main archaeological sites corresponded to the cities mentioned by the ancient texts, as did the line of the bed of the old western branch of the Nile.

The scientific approach to predefined surveys took into account the topographies of the areas studied. The ancient relief of the now submerged lands has been changed over the centuries by seismic (earthquakes and tidal waves), aquatic (flooding and sea-level change) and geological (subsidence) forces. But changes did not stop with immersion. Once submerged the terrain was no less subject to seismic activity, to the actions of sediments, currents and waves. For example, the upper layer of the sea bed in the Bay of Aboukir consists mainly of sand and silt from the Nile, brought by Easterly currents. Similarly, in Alexandria, the bottom has much sedimentation, which has accumulated over the centuries in the western part of the Port. It is this silt which covers the area of the ancient Heptastadium causeway, and on which is now built an entire neighbourhood.

It seemed likely that many archaeological remains in these areas were covered with sediment. While it is possible to locate artefacts and structures by precise mechanical surveys over small areas, this approach was unrealistic given the scale of the area under consideration. Only searches using the latest electronic equipment, like nuclear magnetic resonance magnetometers could achieve this. An effective way to locate archaeological remains submerged and covered with sediment was to create a highly detailed magnetic map using NMR magnetometers. Continuously measuring the value of the geomagnetic field with an accuracy of a few thousandths of gamma, they reveal any buried archaeological remains. An echo-sounder, side-scan sonar, and more recently, multi-beam sonar, provide an electronic image of the sea floor and reveal any objects projecting from the sediment. They were especially useful for the location of archaeological areas that were not completely covered. A survey conducted by sediment sonar supplied geological information about the different layers forming the sea-floor of the area. This is capable of providing information about local seismic events (revealing inclined sedimentary layers, horsts, diapirs, etc.).

Research shows that the sites were struck at different times by cataclysmic geological events. They also confirm the slow land subsidence that affected this part of the south-eastern Mediterranean basin. Geological observation revealed these through the discovery of seismic after-effects in the seafloor substrate. Geological analysis also showed in some places, principally in the Bay of Aboukir, the signs of soil liquefaction. These local events can be triggered by the action of a high pressure on land of a clayey nature. The weight exerted by monuments, combined with the extra weight of an exceptional flood or a tsunami, creates compression, which then causes the expulsion of the water contained in the structure of clays. These latter suddenly lose their volume which creates sudden subsidence. An earthquake can also induce the same phenomenon. These events, occurring independently or concurrently, could cause major destruction, and explain the disappearance under the waters of a large portion of the Canopic region and the Portus Magnus of Alexandria. Regular collapse and sea level rise- recognized since antiquity- have obviously contributed significantly to the flooding in this area.

It is thought that in Alexandria the sea level has risen by 1 to 1.5 meters, and the land level fallen by 5 to 6 meters during the last 2000 years. The South-Eastern coast of the Mediterranean is also subject to tectonic movements due to the subduction of the African plate beneath the Anatolian plate. Ancient texts record earthquakes and tidal waves hitting the region, in particular, the tidal wave of 365 AD that affected the coasts of the south-eastern Mediterranean, the earthquake in the middle of the eighth century, and that of 1375 which destroyed the lighthouse.

The results, merely outlined here, show the effectiveness of the search method. Designed to be comprehensive, these surveys themselves provide interpretable archaeological data about the history of land use and the evolution of the landscape, even before any intrusive and destructive archaeological work begins. The exploration program is the first step towards a possible excavation, it can demonstrate the need to continue and to intensify the archaeological activity on certain areas of the sites.