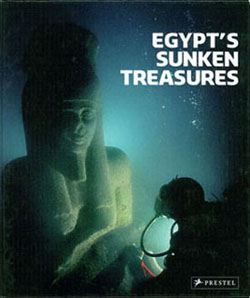 Long before the foundation of Alexandria, the region of Canopus was a crossroad between Egypt and the other great civilizations on the ancient world. Submerged by the waters of the Mediterranean long since, the ancient cities of Canopus, Thonis and Heracleion flourished on the shores of the Mediterranean at the mouth of the Nile. Each of the diving expeditions carried out by archaeologists under the direction of Franck Goddio has revealed more of the reality behind the dreams these mysterious places have evoked. Sixteen centuries of a history that is among the richest in the Mediterranean world are thus revealed.The statue of a queen depicted as Isis-Aphrodite, of a priest tenderly holding an Osiris-Canopus Jar, the colossi of a king and queen, the monumental sculpture of the god Hapy, the remains of sphinxes, fields of fractured columns scattered as if by the hand of a giant - in all these discoveries, made with the most advanced archaeological methods and based on historical knowledge, an enigmatic, fascinating world is brought to light.

I - The Region and its History
Franck Goddio: Rediscovered Sites
Manfred Clauss: The History of Alexandria and the Sur­rounding Region